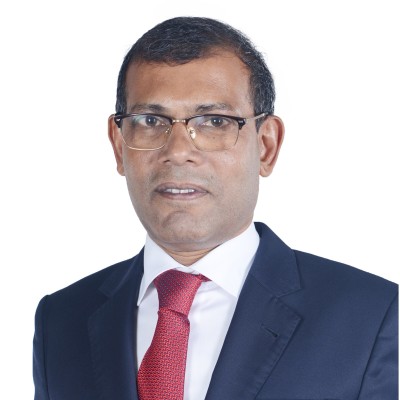 Often dubbed the ‘Mandela of the Maldives’ Mohamed Nasheed was the Maldives’ first democratically elected president. He remains a figurehead for the promotion of human rights and democracy in Islamic countries, and an international icon for action against climate change. President Nasheed is currently Speaker of the People’s Majis (parliament), a position he was elected to in May 2019.

A former human rights activist, Nasheed led a campaign of non-violent, civil disobedience that pressured Maumoon Gayoom, then Asia’s longest-serving ruler, to relax authoritarian controls and allow political pluralism. In historic democratic polls in 2008, Nasheed was elected president, sweeping away 30 years of one-man rule. Arrested, imprisoned and tortured in the Maldives on numerous occasions for his political beliefs, Nasheed was named an Amnesty International ‘Prisoner of Conscience,’ and is widely credited for playing an instrumental part in bringing freedom and democracy to the Maldives. During his time in office and thereafter, Nasheed has played a prominent global role advocating for action to curb greenhouse gas emissions that threaten his nation. In 2009, to highlight the Maldives’ vulnerability to rising sea levels, Nasheed famously held a meeting of his cabinet underwater. Nasheed also implemented policies to turn the Maldives into the world’s first carbon neutral country. On 7 February 2012, democratic progress in the Maldives suffered a major setback when Nasheed was forced to resign the presidency under the threat of violence, in a coup d’etat perpetrated by security forces loyal to the old guard. Nasheed narrowly missed out on re-election for president in late 2013, losing the presidential run-off by less than 3%. The election was marred by repeated interventions, delays and vote cancellations by the Supreme Court, which was accused of conspiring with Nasheed’s political rivals to prevent his return to office. President Nasheed was elected the President of the Maldivian Democracy Party in August 2014. In March 2015, the Maldives Criminal Court sentenced Nasheed to 13 years in jail for “terrorism” in a blatantly politicised trial strongly condemned by numerous governments and civil society organisations. Nasheed spent a year in jail, before being permitted to travel to the UK for medical treatment, where he was promptly granted political asylum. The regime banned Nasheed from contesting the 2018 presidential elections, despite him winning the Maldivian Democratic Party (MDP) primaries. His childhood friend and leader of the MDP parliamentary group, Ibrahim Mohamed Solih, contested in his stead, and won a landslide victory. President Solih was sworn into office on 17 November 2018. President Nasheed won the 2009 Anna Lindh Prize, in recognition of his work promoting human rights, democracy and environmental protection. In September 2009, Time Magazine declared President Nasheed a ‘Hero of the Environment’. In April 2010, the United Nations presented Nasheed with its ‘Champions of the Earth’ environment award. In August 2010, Newsweek named President Nasheed in its list of ‘World’s Ten Best Leaders’. In 2012, The Island President, a documentary feature film about Nasheed, was released in theatres worldwide. In June 2012, Nasheed was presented with the James Lawson Award for the practice of non-violent action. In November 2014, President Nasheed was presented the Mission Blue Award, which Dr. Sylvia Earle honoured for his distinguished work on climate change advocacy. In November 2016, President Nasheed was appointed to the Board of Directors of Freedom Now, a nonpartisan nonprofit organization, founded in 2001, with charitable status in the U.S. and the UK. President Nasheed was bestowed the prestigious ‘2017 Courage Award’ in Februray 2017 by a coalition of 25 international human rights groups at the 9th annual Geneva Summit for Human Rights and Democracy.

Write to your MP